Latest News: CIMC Group announced on the evening of August 25 that the company originally planned to purchase Maersk Container Industries, a subsidiary of APMM. At present, due to the huge uncertainty in the review of the concentration of operators, the transaction prerequisites stipulated in the Equity Purchase Agreement may not be reached. Therefore, both parties have
After comprehensive and prudent evaluation, it was decided to terminate the transaction. 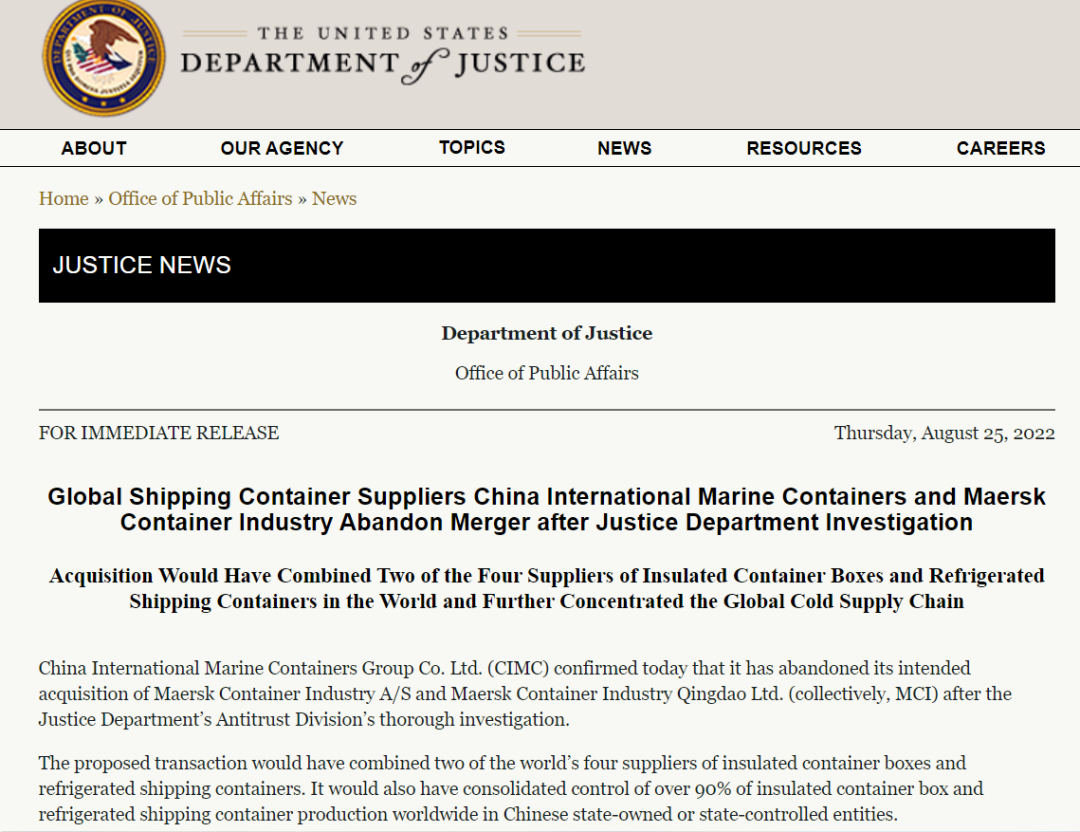 For example, Xinde Maritime Network previously reported “US$1.0838 billion! CIMC Group acquired 100% equity of Maersk Industries.” On September 28 last year, CIMC Group released official news announcing that it had signed an acquisition agreement with Maersk Group to acquire Maersk Container Industries (Maersk Container Industries), the marine refrigeration and refrigerated container manufacturing business of Maersk Group. (referred to as “Maersk Industries”) 100% of the equity, the transaction consideration is about 1.0838 billion US dollars, or about 7 billion yuan.

When the acquisition agreement was signed in September last year, Maersk Group officially introduced that CIMC Group will take over the personnel and assets of Maersk Container Industry Company, including the cold box manufacturing plant in Qingdao, China and the research and development in Tinglev, Denmark. and testing facilities.

It is worth mentioning that if this transaction is finally completed, it will mean that Maersk has completed the emptying of its container manufacturing business. Maersk Group said that when the transaction is completed, Maersk Container Industry’s 2,300
employees will become CIMC employees. The acquisition is expected to close in 2022 or earlier.

At that time, CIMC Group said that it “survived from many international bidders” and won relevant assets and businesses. Through this acquisition, CIMC will master the core technology of marine refrigerators and improve itself. Core competitiveness in the field of cold chain equipment and strong synergy with its cold chain business.

Mai Boliang, Chairman and CEO of CIMC Group, said at the time: “Through technology and innovation, we hope to create a brand-new growth platform in the cold chain business. I highly recognize the performance and innovation of Maersk Industries, and welcome them Join CIMC. I am confident that by integrating the outstanding talents and technologies of Maersk Industries and CIMC’s global cold chain business, we will become the core partner of our customers and create a brilliant future.”

Assistant Attorney General Jonathan Kanter Jonathan of the Antitrust Division of the U.S. Department of Justice
“Many of the daily necessities of the American consumer depend on cold chain supplies around the world,” Kanter said. “CIMC’s acquisition of MCI could have implications for this aspect of the Chinese (U.S.) economy (cold chain transportation). to damage, which could specifically lead to higher prices and reduced quality and resilience in global supply chains.

“Such M&A would also further consolidate CIMC’s dominance in already consolidated industries and eliminate MCI
Position as an innovative, independent competitor. The deal will also significantly increase coordination risks among the remaining container suppliers in the market. ”

In short, what the U.S. side means is that the deal would lead to over-concentration in the market, potentially leading to higher prices, lower quality and less innovation.

The U.S. Justice Department plans to file a lawsuit in U.S. court on Thursday if the two companies don’t walk away from the deal.

The DOJ also revealed that “The DOJ Antitrust Division and the German Bundeskartellamt cooperated in their respective investigations.

The Financial Times also reported that another person familiar with the matter said that “German competition regulators are also considering blocking the deal.”

Maersk Chief Financial Officer Patrick Janney
Jany said Maersk will now begin evaluating the best structure for its container production business. He added: “Unfortunately, despite the efforts of all parties involved, the transaction will not happen. Throughout the process, MCI
‘s performance was outstanding, thanks to the dedication of all staff. Maersk will continue to be the proud owner of MCI for the foreseeable future. ”

In fact, this is not the first time that the United States has “hit” CIMC and other Chinese container manufacturers. As early as 2014, the U.S. Trade Commission
Commission has investigated CIMC and another Chinese company for so-called “suspected anti-competitive dumping practices”. At the time, the U.S. Trade Commission said that these companies relied on subsidies from the Chinese government to sell 53-foot containers to the U.S. market below cost, and that such “dumping” had harmed the interests of the U.S. container manufacturing industry, and said it would take action against CIMC. 107% import tariffs are levied by other enterprises. But in the end, CIMC was able to successfully appeal.