Latest News: On September 1, the Guizhou Provincial Department of Industry and Information Technology announced the list of chemical parks to be recognized in Guizhou Province (the second batch).

The “Measures for the Identification of Chemical Industrial Parks in Guizhou Province (Trial)” requires that the identification of chemical industrial parks must meet the twelve conditions of the identification standard, and additional points must be considered. The overall score for infrastructure, safety production, environmental protection, and economic development should be 60 points and above. Among them, the planned area of ​​the park is more than 2 square kilometers. A leading chemical industry with outstanding product characteristics should be formed, and the proportion of the main business income of the chemical industry in the park should reach more than 60%.

It is reported that the newly-built chemical park should apply to be recognized as a chemical park within five years from the date of announcement. The chemical enterprises settled during the construction period of the new chemical park shall be identified and managed by each city (state) according to the key monitoring points. 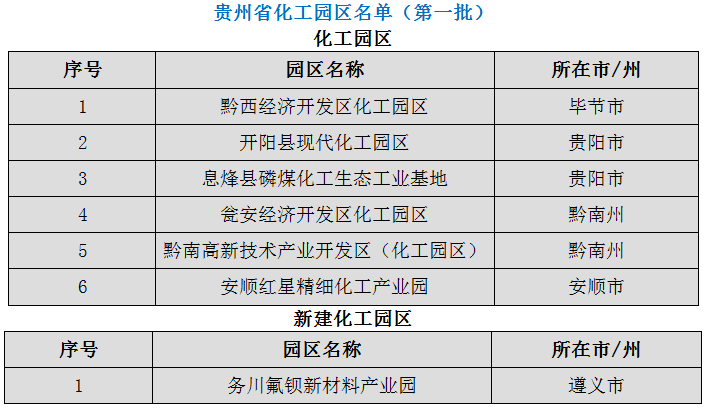 Tags：Guizhou announces the list of the second batch of chemical parks to be recognized
Share:
Prev： State Council: Support Shandong to deepen the transformation of new and old kinetic energy and promote green, low-carbon and high-quality development
Next： Evonik opens new innovation center in Pennsylvania, USA