Latest News: Discovering scratches on your car is a special kind of heartbreak, but in the future, they may be gone before you notice it. Scientists in South Korea have developed a coating that can self-heal scratches in as little as 30 minutes when exposed to sunlight.

The new coating contains a propylene-based polyol-based polymer network with a hindered urea structure. Essentially, these polymers have dynamic chemical bonds that break when stimulated and then reassemble in their original arrangement to effectively repair minor damage like scratches. In this case, the trigger is heat, which is provided by an organic photothermal dye that captures infrared light while also being embedded in the coating.

In tests on a model car, the team said the coating healed scratches in 30 minutes in midday sunlight. In theory, that means someone could open your car door with the key and the scratch will disappear before you get back.

If half an hour is too long, the team has also shown that under concentrated light, the process can be greatly accelerated. It can be patched in 30 seconds by focusing sunlight onto the marker using a magnifying glass.

The research team says the new coating has some advantages over existing self-healing coatings. Using an organic photothermal dye means it requires far less energy than the normal inorganic version, which usually requires a heat gun or concentrated UV light. Others like Nissan Scratch
Shield works in milder conditions, but can take up to a week. In addition, the new coating can repair scratches in the same location multiple times, unlike self-healing materials that use resin burst capsules. 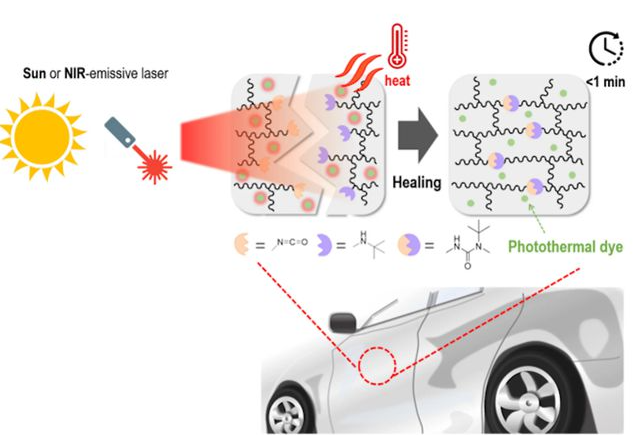 It’s also important to note that the new coat is clear, so it doesn’t mess with the paint color and can be used with existing spray methods. While cars are the primary use case, the team says it could also be applied to other devices that get scratched frequently, such as cell phones or building materials.