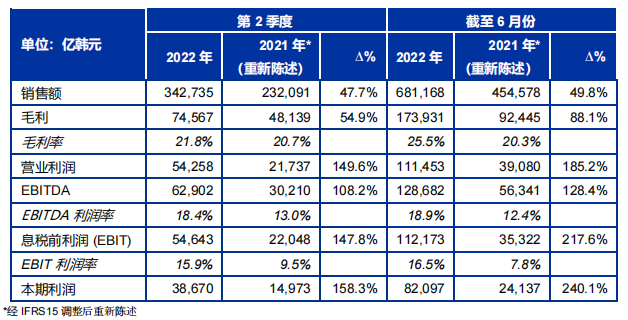 After a positive start and a strong first quarter, all divisions of SONGWON Industrial Group are in the second quarter of 2022
Solid operating results were achieved in the quarter. Demand levels in the Raw Materials and Performance Chemicals divisions remained high in the second quarter of 2022, resulting in a stable quarter with profitability and returns climbing again.

In line with expectations, the chemical raw material segment’s global demand level remained strong in the second quarter of 2022, with consolidated sales of KRW 260,406 million (Q2 2021: 1,757.11
KRW 509.271 billion in sales in the first six months of the year (sales in the first six months of 2021: KRW 339.698 billion). with Q2 2021 and top 6
month-on-month, revenue increased by 48.2% and
49.9%. Overall solid operating results were driven in part by increased global forecast volumes driven by customers’ efforts to offset potential logistical delays and supply issues related to competitors, but also positively impacted by favorable foreign exchange developments in all regions.

Although negatively affected by the blockade across Asia and the Russian-Ukrainian conflict, SONGWON
The core business of polymer stabilizer sales continued to grow. Fuel and lubricant additives performed strongly as customers made advance orders ahead of a return to normal mode in response to logistical delays. Thanks to higher demand in Europe, the United States and South Korea, continued industry recovery and effective price increases that have been implemented, the
The coatings business performed well in the second quarter, in line with expectations.

The Performance Chemicals Division also performed very well in the second quarter, with a revenue increase of 46.0% (2nd quarter 2022) compared to the second quarter of 2021 (KRW 56.380 billion)
Quarterly: KRW 82.329 billion). The segment achieved sales of KRW 171.897 billion in the first six months of 2022, up from 1,148.80 in the first six months of 2021.
billion won) growth
49.6%. During the second quarter, strong global demand and established price growth were also favorable factors driving performance growth. Sales of tin intermediates were in line with the factory’s maximum output, and the price of metallic tin rose early in the quarter but fell back later in the quarter. 2022
Higher logistics costs continued to constrain PVC outside Asia during the second quarter of 2018
Sales, but higher prices have a positive impact on profitability. Despite lower volumes, solution urethane and thermoplastic urethane solutions revenue increased thanks to higher prices. TPU sales have grown in the wire and cable market thanks to strong demand from Europe, Middle East, Africa, Far East, Northeast Asia and the United States.

Looking ahead to the second half of the year, it is not yet possible to accurately predict what will happen in the coming months, given many uncertainties such as geopolitical risks, a volatile macroeconomic environment, inflationary pressures, logistical issues, material shortages and ongoing outbreaks occur. SONGWON
It is predicted that the current high demand for raw materials will continue for several months, given that the international situation continues to drive market prices higher. Facing the current uncertainties, SONGWON
It will continue to closely monitor global developments and demand levels, while adhering to penetration strategies in key target markets. Based on the excellent operating performance in the first 6 months of the year, SONGWON
With the confidence to continue to provide customers with reliable service and meet any new challenges with a solid business foundation.

Tags：Excellent Results SONGWON Industrial Group Announces Second Quarter Earnings
Share:
Prev： Yuxin’s net profit in the first half of the year was 210 million yuan, and it plans to acquire 10% equity of Brocade New Materials for 10 million yuan
Next： The industry discusses the high-value utilization of straw under the background of “double carbon”, and Fengyuan Bio has achieved remarkable results