The nearly $2 billion project is being built at Total Energy’s refinery in Port Arthur, Texas. Ethylene produced by the cracker will be used as feedstock to supply Baystar’s existing polyethylene (PE) plant, as well as the new Borstar® Technology polyethylene plant currently under construction in the Bayport area.

●On July 2, Sinopec Hainan Refining & Chemical’s 1 million t/a ethylene and refining expansion project started mid-term delivery and entered the stage of preparation for production. The project is located in Yangpu Economic Development Zone. It is a key project of Hainan Province and Sinopec, with a total investment of over 28 billion yuan. After completion, it will promote the development of downstream industries of over 100 billion yuan. It is reported that the main projects involved in the mid-term delivery include 3 sets of main units and 14 sets of supporting projects, including pyrolysis gasoline hydrogenation unit, aromatics extraction unit, and light hydrocarbon recovery unit.

●On March 16, the civil engineering of Sinopec Tianjin Nangang Ethylene Project started. The project has a total investment of over 30 billion yuan, with a 1.2 million ton/year ethylene cracking unit as the leader, and the industrial chain is extended to build a number of high-end new material units such as alpha-olefin and ultra-high molecular weight polyethylene. Among them, 11 units use Sinopec Advanced technology with independent intellectual property rights, the construction period is about 22 months. The project cluster is expected to be completed in 2025.

The world’s ethylene production capacity will continue to grow rapidly 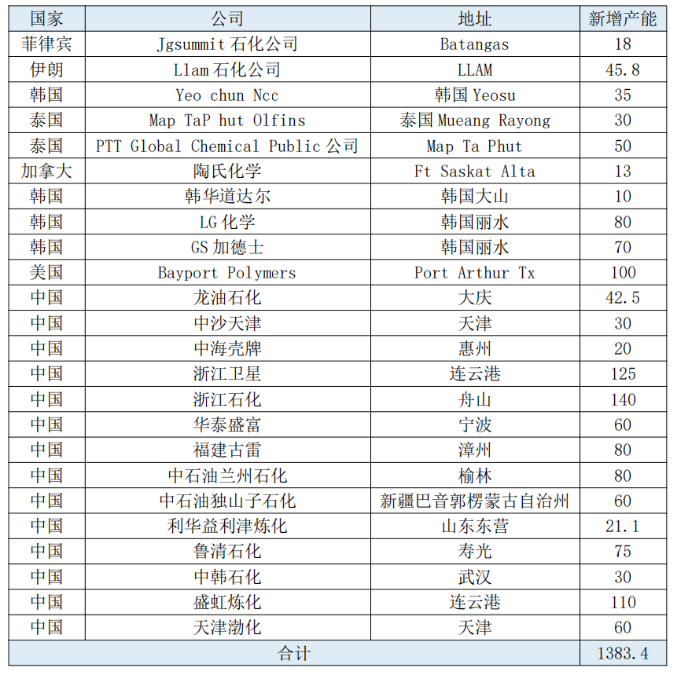 According to the statistics of CNPC Economic Research Institute, 2021 will be the year with the largest number of production capacity completed and put into operation in the history of China’s ethylene industry. The raw material ethylene capacity is expanded by 3.25 million tons per year, and the coal methanol-based ethylene capacity is expanded by 600,000 tons per year. Among them, the production capacity of the gas-based route has developed rapidly, using both overseas ethane and domestic ethane resources, and the new capacity has increased by 1.25 million tons per year compared with 2020; the coal/methanol-based route is affected by the national “two-carbon” policy, and the production capacity has increased significantly slow down.

In 2022, domestic new ethylene production capacity is expected to be 10,000 tons/year

After 2022, domestic ethylene capacity expansion will continue to expand, but capacity growth will slow down compared to 2020 and 2021. From 2023 to 2025, there are still a large number of ethylene projects put into operation in China, and the total ethylene production capacity with a high probability of operation is 16.4 million tons/year. Among them, oil-based ethylene will account for the vast majority; the new capacity of gas-based ethylene will face greater uncertainty, mainly due to the stability of overseas ethane supply; the scale of new coal/methanol-based ethylene capacity will be relatively limited, mainly As the provinces have successively introduced production capacity control policies in the coal chemical industry and other industries under the “dual carbon” goal.

Tags：and the total domestic production capacity may exceed that of the United States! Another million tons put into production! During the year the new production capacity of ethylene will be 13 million tons
Share:
Prev： Baling Petrochemical’s new medical polycaprolactone products are sold for the first time
Next： Wanhua Chemical released its semi-annual report, achieving an operating income of 89.119 billion yuan