Caixin China’s manufacturing PMI rebounded to 51.7 in June, the highest since June 2021

With the overall improvement in the prevention and control of health incidents, the resumption of work and production continued to advance. In June, the prosperity of the manufacturing industry rebounded, and production and business activities resumed expansion. 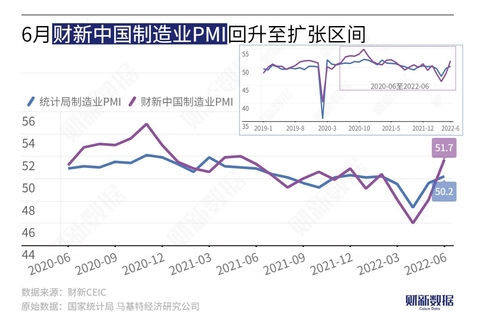 The June Caixin China Manufacturing Purchasing Managers Index (PMI) released on July 1 recorded 51.7, up 3.6 percentage points from May, ending the contraction trend of the previous three months and returning to the expansion range, and The highest since June 2021.

In terms of itemized data, supply strengthened significantly in June, and demand also improved. Both the production index and the new orders index returned to the expansion range for the month, with the production index hitting a new high since December 2020. The output of the three major product categories covered by the survey all increased, and the growth rate of consumer goods was the most significant. On the demand side, the new orders index rose slightly above the line of prosperity and decline, and the rebound was weaker than that of the supply side. The interviewed companies reported that the improvement of the domestic epidemic and the increase in customer demand led to a rebound in sales, but the overall market conditions were relatively weak, and the impact of the epidemic was still there, dragging down the overall growth rate. External demand also improved, with the new export orders index rising to expansionary territory for the first time since August 2021 in June.