Liang Tieshan gave a detailed report on Henan’s energy aid to Xinjiang and future plans. He said that Henan Energy actively promotes the industrial aid to Xinjiang, gives full play to its technical and management advantages in coal and chemical industries, and continuously improves and expands its enterprises in Xinjiang, and its contribution to the local area is constantly increasing.

In the next step, Henan Energy will promote a number of key energy conversion projects, building a 15 million t/a coal-to-olefin project in Zhundong, a 400,000 t/a natural gas-to-BDO project in Baicheng County, and seeking a partnership with the National Energy Group in Hami. Cooperation, jointly develop relevant resources, and make greater contributions to the high-quality economic and social development of the autonomous region.

The main leaders of Xinjiang Uygur Autonomous Region said that Xinjiang has excellent natural resources and is accelerating the construction of the core area of ​​the Silk Road Economic Belt, with huge development potential and broad prospects. We sincerely hope that everyone will come to Xinjiang for inspection, exchange, investment and business, share the opportunities of the “Belt and Road” construction, actively participate in energy development and transformation, and achieve mutual benefit and win-win results. We promote the comprehensive rule of law in Xinjiang, create a market-oriented, law-based and international business environment, and better support and guarantee the investment and development of various enterprises in Xinjiang. It is necessary to make overall plans for development, safety production, ecological protection and other work, adhere to the general principle of seeking progress while maintaining stability, start relevant projects as soon as possible, promote resource-intensive industries to extend the industrial chain and increase added value, and promote high-quality economic development with the people at the center .

Henan is rich in energy resources and has industries such as energy, high-end chemicals, modern trade, modern finance, intelligent manufacturing and new alloy materials. The industry is mainly distributed in 16 provinces and municipalities in Henan, as well as Xinjiang, Guizhou, Inner Mongolia, Shaanxi, Qinghai and other provinces (regions) and Australia. It has 2 listed companies in Dayou Energy and Jiutian Chemical and 1 company listed on the New Third Board in Puyang Luyu New Materials. Coal resource reserves are 31.8 billion tons (including 7.53 billion tons in production mine reserves and 3.63 billion tons in recoverable volume), with a production capacity of more than 80 million tons (53 million tons in the province and 27 million tons outside the province). Coal and coking clean coal are the main ones. The production capacity of chemical products is nearly 10 million tons, and the products mainly involve 18 categories such as methanol, ethylene glycol, acetic acid, dimethyl ether, new chemical materials carbon fiber, polyoxymethylene, BDO (1,4-butanediol), PET, and PBT.

On July 1, Henan Energy held a groundbreaking ceremony for the first phase of the 300,000-ton MMA project in Puyang Park, marking the official start of construction of the first domestic new-type ionic liquid-catalyzed ethylene-based MMA industrialization plant. It is understood that the project is jointly funded and constructed by Zhongyuan Dahua Company, Puyang Financial Holding Co., Ltd., and Puyang Economic and Technological Development Zone Urban Construction Investment Co., Ltd. The total investment of the first phase of the project is 997 million yuan, and the registered capital is 330 million yuan. 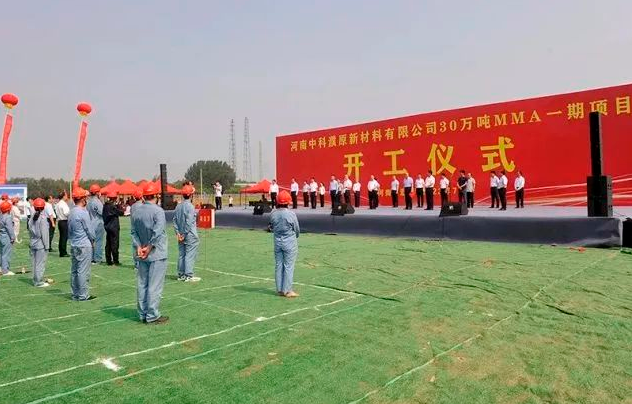 According to the agreement, the two parties will jointly build a 10,000-ton carbon fiber industrial park, wind power blade design and manufacturing, photovoltaic modules, new energy industry and other projects in Shangqiu City. The total investment scale of the project exceeds 15 billion yuan, which will create a new highland for the new material and new energy industry in Henan Province. .

In addition, the two parties will integrate high-quality enterprises in the wind power industry chain in Henan Province and invest in the production and manufacture of carbon fiber blades. The total investment of the first and second phases is about 800 million yuan.

The construction of new energy industry is the highlight of this signing. Specifically, during the “14th Five-Year Plan” period, it will invest in the construction of 1.5GW of centralized wind power generation capacity, with a total investment of about 11 billion yuan.