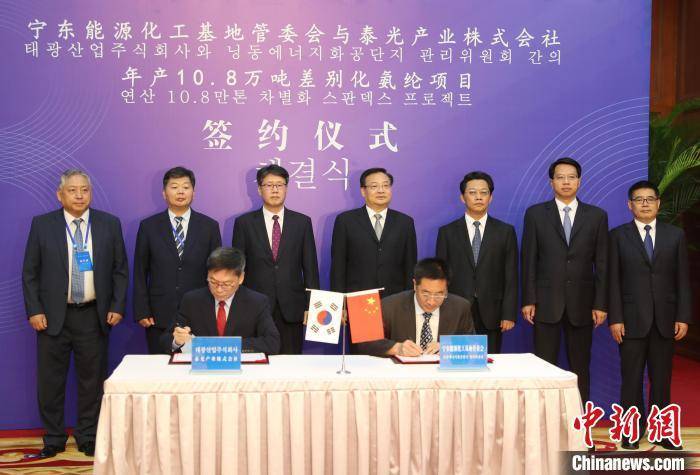 On the evening of August 8, Liang Yanshun, Secretary of the Party Committee of Ningxia Hui Autonomous Region and Director of the Standing Committee of the National People’s Congress, Zhang Yupu, Deputy Secretary of the Party Committee of Ningxia Hui Autonomous Region and Chairman of the Autonomous Region, Kim Han-kyu, Consul General of the Republic of Korea in Xi’an, Counselor of the Korean Embassy in China and the Council of Governors of South Korea Witnessed by the director of the firm, Jin Xiangguang and others, Tao Shaohua, director of the management committee of Ningxia Ningdong energy and chemical base, and Ge Zaizhu, executive of South Korea’s Taiguang Industry Co., Ltd. and chairman of Taiguang Chemical Fiber (Ningxia) Co., Ltd., respectively represented the management committee of Ningdong energy and chemical base. , Taiguang Industry Co., Ltd. signed the “Project Cooperation Framework Agreement” in Yinchuan City, Ningxia, and exchanged the signed texts. This move marks the official landing of the 108,000-ton differential spandex project of South Korea’s Taekwang Industry in Ningxia.

It is reported that this contracted project is one of the activities of the China (Ningxia)-South Korea Friendship Week, which will be held in Yinchuan City from August 8 to 11 in a combination of online and offline methods. The Korean Consulate General in Xi’an will be invited to China Representatives of institutions and executives of many Korean companies attended the event, and signed a number of cooperation agreements in the fields of economic and trade investment, international friendship cities, and educational exchanges. 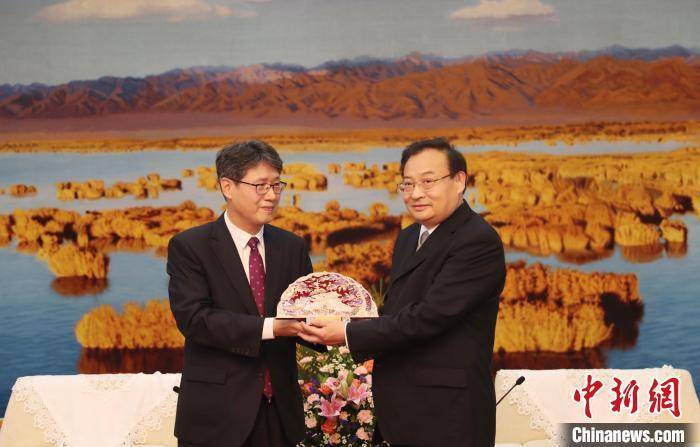 Secretary of the Party Committee of Ningxia Hui Autonomous Region and Director of the Standing Committee of the National People’s Congress Liang Yanshun (right) and the Korean Consul General in Xi’an Kim Han-kyu (left) exchanged souvenirs.

Spandex is one of the most elastic synthetic fibers at present. It has excellent fatigue resistance and elastic recovery, and its elasticity is lasting and non-deformable. It occupies a very important position in the current development of new textile products, and is gradually used in medical, automotive and other industrial fields. Promote use.

Korea Taekwang Industrial Co., Ltd. was established in 1950. It started from polyester, nylon, spandex and other chemical fibers and gradually expanded to spinning, weaving and other textile industries, and has now become the largest comprehensive chemical fiber manufacturer in Korea. In recent years, Ningdong Base has successively introduced Taihe New Materials and South Korea’s Hyosung two spandex production enterprises, and extended the introduction of Wuheng Chemical’s 230,000 tons/year 1,4-butanediol, Wanhua Chemical’s 300,000 tons of MDI separation, and Penglai Chemical. The upstream and downstream supporting projects such as Hongwei 41,000 tons of spandex functional additives have initially built the entire spandex industry chain, and the agglomeration effect of spandex industry has gradually emerged.

The project in Ningxia this time belongs to the high-performance fiber and biodegradable plastic industry chain strong chain project. South Korea Taiguang Industry Co., Ltd. registered and established a wholly-owned subsidiary Taiguang Chemical Fiber (Ningxia) Co., Ltd. in the Ningdong base. The project plans to build a differentiated spandex project with an annual output of 108,000 tons, with a planned investment of 4.468 billion yuan and a planned area of ​​500 mu. The main products are 51,000 tons of 20D spandex, 16,200 tons of 30D spandex, and 40,800 tons of 40D spandex. The three-phase construction, each with a spandex production capacity of 36,000 tons, is scheduled to be completed in August 2024, the second phase is scheduled to be completed in August 2025, and the third phase is scheduled to be completed in August 2026.

In recent years, South Korea’s Hyosung Group, Taiguang Chemical Fiber and other large enterprises have successively invested in Nanjing. As of May this year, there were 33 Korean businessmen directly invested in Ningxia, and Ningxia actually used 120 million US dollars of Korean capital. South Korea’s investment in Ningxia covers spandex manufacturing, computer software development, sapphire crystal, and import and export of technical goods. In 2021, the total import and export volume of Ningxia to South Korea will be 1.46 billion yuan, a year-on-year increase of 105.6%.