Latest News: On the evening of June 29, Shandong Longhua New Materials Co., Ltd. issued an announcement on the completion and commissioning of the 360,000-ton/year high-performance polyether polyol expansion project. 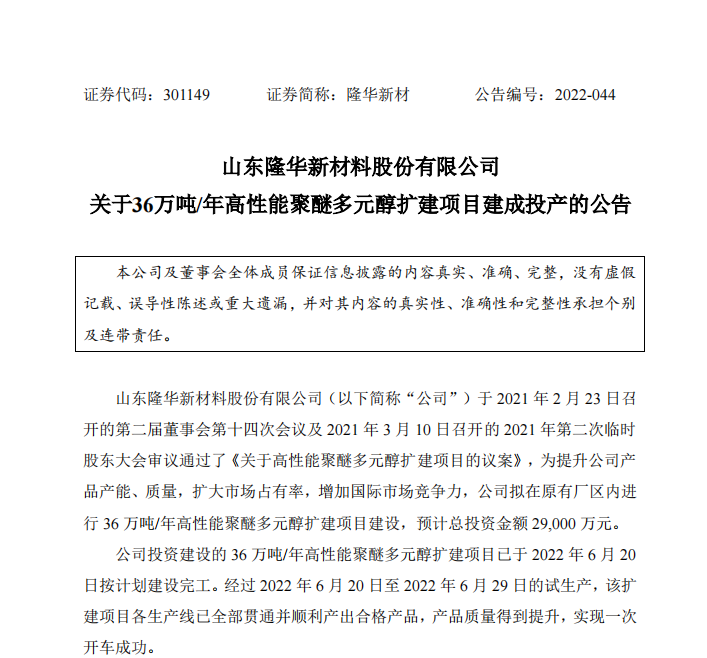 Longhua New Materials said: The 360,000-ton/year high-performance polyether polyol expansion project invested and constructed by the company was completed on June 20 as planned. After the trial production from June 20th to 29th, all production lines of the expansion project have been connected and successfully produced qualified products, the product quality has been improved, and a successful start-up has been achieved.

The product structure of the 360,000-ton/year high-performance polyether polyol expansion project is mainly based on high-activity polyether (high-resilience polyether) and polyether for CASE (elastomer polyether), mainly for transportation, sports and construction Waterproof field, etc. The project enriches the company’s existing product structure, provides customers with more consumption scenarios, and the market capacity of new products is relatively large. The company’s existing total production capacity of polyether reaches 720,000 tons/year, which will help the company to further expand its market share at home and abroad, consolidate the company’s industry position, and maintain the company’s competitive advantage in the same industry.

Since the project will take a certain period of time from trial production to full production, the release of project capacity requires a process, and even if full production is reached, it may be affected by factors such as changes in the market demand environment and intensified competition, resulting in lower project benefits than expected Investors are advised to pay attention to and pay attention to investment risks.